Praise the Reanimator! Grave Robber has just released a new lyric video for the killer track “Straight to Hell.” And if the rest of the album is anything like this track, we are in for a bloody delightful treat.

Grave Robber was formed after the guys heard a sermon based on Romans 6, and then took communion. This got them to thinking about being alive, and dead, and symbolically eating flesh and drinking blood… after a couple years of prayer, they decided to go ahead with this horrific new project and wrote “I, Zombie.” Grave Robber was born, and four of the raddest of punk’s undead would go on to continue writing several albums of deliciously gory tunes that Vincent Price would most definitely approve of.

Be Afraid, released in 2008, was a game-changer for me. The infectiously catchy hooks, Wretched’s hauntingly deep voice, and a serious depth to the lyrics and symbolism of the band, I was hooked. Inner Sanctum, Exhumed, You’re All Gonna Die, followed, each packing a decaying punch of their own, and the upcoming Straight to Hell is set for a Nov. 25th release. I love that they have such diversity within their creepy punk sound – there are songs leaning more towards metal, some hardcore influences, and tunes I could imagine coming from Alice Cooper. Even if you’re not digging the horror punk style, you must appreciate that these dudes are sick songwriters. “Whoa-oh”s a plenty, and sing along choruses would make it a riot to belt out your favourite ghoulish song along with Wretched at a live(?) show. Grave Robber also gives us some wicked covers of bands like Black Sabbath, and Our Corpse Destroyed.

Grave Robber knows how to put their zombiefied spin on just about anything. The “Cellar Sessions” are a series of cover songs done Grave Robber style, tackling everything from “Space Oddity” to “Time after Time,” they are definitely worth checking out. Some might say they’ve butchered the originals, but I have a feeling that the GR guys would get a kick out of hearing that. The Cellar Sessions are being recorded to be given away totally free just for the enjoyment of the fans, and you can grab them here.

Another super cool thing that Grave Robber also wrote and recorded the song “Hunger Haunts” which is being used for TV and radio ads for Feed The Children Canada’s Hunger Haunts campaign. Hunger Haunts is a non-profit that is inviting schools, businesses and haunters to put on a Halloween haunted house event to support their campaign to fight hunger in Canada.

Check out the official lyric video for it here: 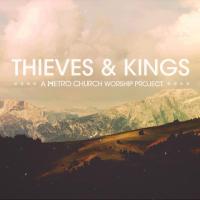