Theatre of Redemption from Swedish metal band Harmony was released in Europe on Nov. 28th, and hit the North American market on Dec. 2nd.

… a wintery world filled with track after track of fiery melodic metal flurries.

There was a time when I grew a bit weary of the power/melodic metal scene and drifted away for bit. But then Harmony came along and released Theatre of Redemption, reminding me of everything I love about this genre.

Theatre of Redemption draws you into a wintery world filled with track after track of fiery melodic metal flurries.

Daniel Heiman of Heed, but probably most notably Lost Horizon, is guest lead vocalist on the full album. The rest of the band is filled out by Markus Sigfridsson – Guitars, Tobias Enbert – Drums, John Svensson – Keyboards, and Raphael Dafras – Bass.

Prior to the album’s release lyric videos for the songs “Window of my Soul” and “Inhale” were released. These were a welcome treat for fans who have been hungry for a new release since Harmony’s last work in 2008.

Theatre of Redemption has all the atmospheric, symphonic, and metal elements that you love about Harmony. Heiman’s soaring vocals are seriously impressive, hitting some wild notes such as in “What If.” Melody abounds, strings are used masterfully throughout, and Svensson’s keys fill out the sound superbly.

I love the vocals and string combo in “What If,” as well as that unforgettable chorus. Definitely a standout track. It’s not easy to pick highlights when each track has so many cool elements to offer, but a few worth mentioning are the wicked bass sound achieved in “Son of the Morning,” the killer guitar solo in “Theatre of Redemption,” and the more chill, piano-driven track “You Are.”

“In Search Of” brings the album to a spectacular close. This track is musically solid and lyrically one of my favourites. 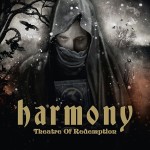 Theatre of Redemption is a 10-song epic that any melodic metal fan must experience.

Theatre of Redemption is available on iTunes, Amazon, and Bandcamp.

One thought on “Review: Harmony – “Theatre of Redemption””