Forfeit Thee Untrue, a four-piece metal outfit out of South Africa, recently got on board with Rottweiler Records to release their latest full-length album, Cremationem Jesus Lacrimam.

FTU’s mission statement is “all about being real and forsaking the fake in your life, encouraging others to do the same in this everyday spiritual battle between good and evil; having faith in God and in yourself in all aspects of life.”

For this latest record, FTU has taken some huge strides into  broader territory since their heavily Demon Hunter-influenced Blood Soaked Splinter.

This album is epic from the first opening seconds: dramatic strings, piano, electronics, and a reading of Genesis in “Let There Be Light.” This track perfectly sets the stage as an introduction to what you’re in for: intense and intricate Scripture-driven metal.

Many tracks reach over the six minute mark, and the killer “Seven (Part II)” is over eight minutes long!  “Seven (Part II) (ft. Ryan Kirby)” has a metalcore feel to it, paired with some serious deep vocals. Kirby’s unmistakable vocals are  a perfect fit in this extended crushing track.

“The Mirror” is a melting pot of metal styles, vocally and musically. This carries on throughout the album as “Seven (Part I)”  is mostly killer screams accentuated by some clean vocals , driving drums, juicy bass, and some guttural vocals that absolutely slay. One of the top tracks of this record for sure.

Another highlight is “Fractured god” (ft. Robyn Ferguson). This powerful track features some cool guitar work and a rock-solid rhythm section.  Death vocals are a welcome addition and contrast to more rapcore and metalcore styles and this song even winds into a worship-rock style reminiscent of Kutless near the end.

The diversity continues as “Sermon of a Dying Atheist” is an engaging track with acoustic opening making its way into some great riffing and soloing. The haunting choir and ambience of “The Dagger Held by Mary” is an unforgettable listen.

Forfeit Thee Untrue does display a lot of qualities taken from some of their influences, as seen in “Black and White (In A World of Grey),” with its stringed instruments, hard-rock style and catchy clean choruses that carry a heavy Skillet flavor. Also, the relentless “Burning of the Last Bible” is great track – very heavy –  but feels like quite an homage to Demon Hunter.

Cremationem Jesus Lacrimam is a fusion of everything from hard-rock to death metal styles that makes this band accessible to nearly any kind of heavy music fan. Hard hitting Scripture based and faith driven lyrics  are sure to strike a chord with listeners inside and outside the Church.

Forfeit Thee Untrue’s crushing Cremationem Jesus Lacrimam is a  powerful album that will add some thunder to any metal lover’s playlist. 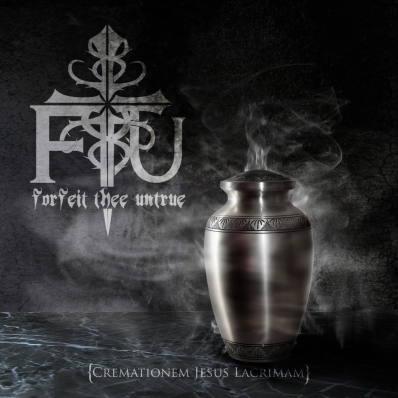 Pick up Cremationem Jesus Lacrimam from  your favorite digital retailer, like iTunes, or grab a hard copy here

Be sure to check out RottweilerRecords.com